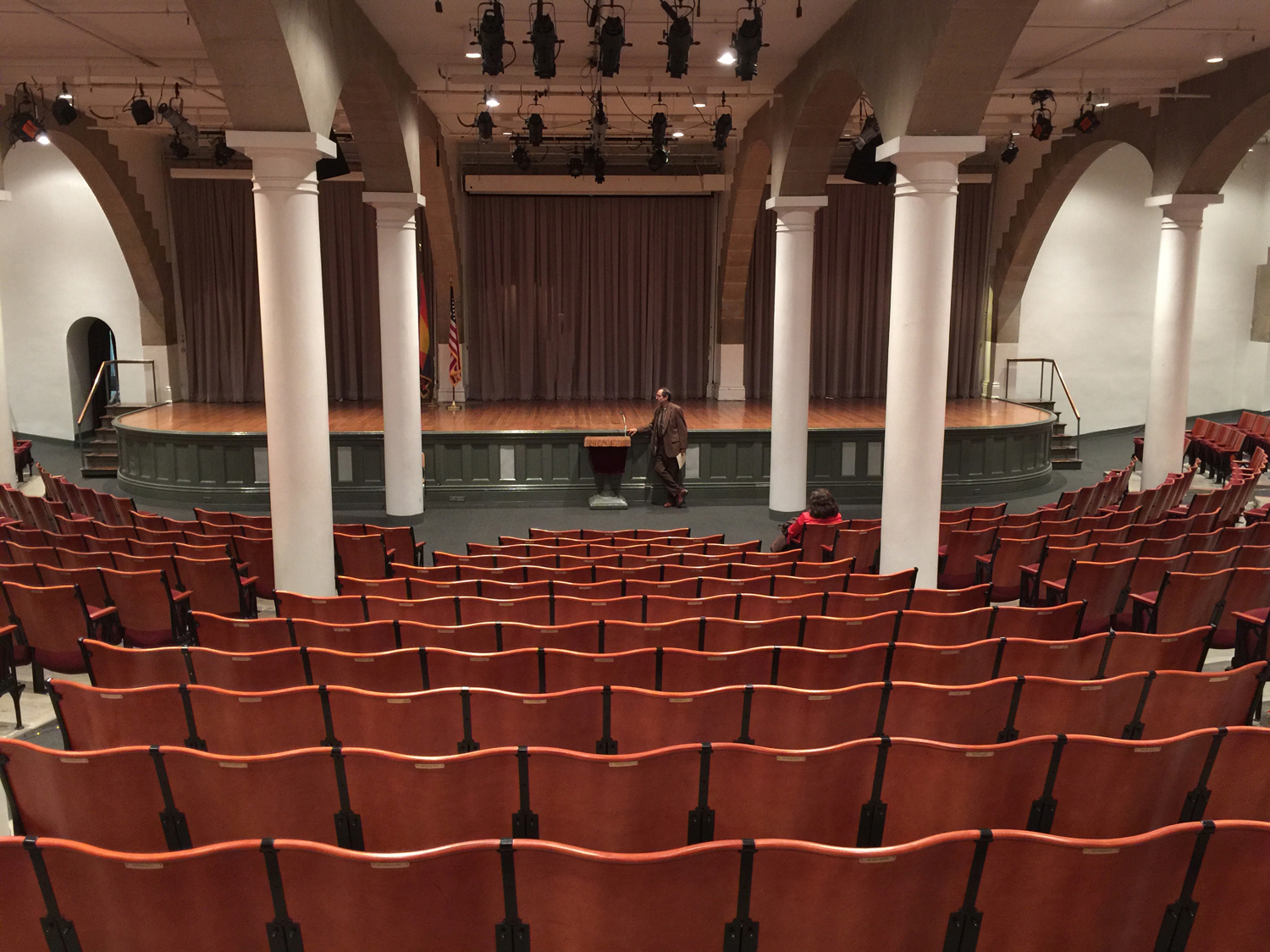 The man who photographed the Great Subway Map Debate …

In 1978, the MTA Subway Map Committee, led by John Tauranac, decided to go public with its prototype subway map, which was intended to replace Massimo Vignelli’s diagrammatic map of 1972. This trial map was put on public view at the Cityana Gallery from January 31 to March 4, and at the AIGA Gallery from February 14 to March 14. The latter triggered the Subway Map Debate at Cooper Union on April 20. The trial map was put up on display again, with other maps from the Cityana show, in the Donnell Library. As far as is known, nobody took any photographs at the Cityana or AIGA exhibitions, and there is only one photo of the Donnell show.

Just one man, Stan Ries, happened to take photographs of the Cooper Union event. Below is an account of how the pictures were taken, how they resurfaced years later, and some interesting points to be observed in them.

In the 1960s, Stan Ries was a practising architect in New York City, but in March 1970, he co-directed the exhibition Hector Guimard at the Museum of Modern Art (MoMA). His photographs of that show are online. Arthur Drexler, Director of the MoMA’s Department of Architecture and Design, was so taken with Ries’s work that he engaged him to photograph a selection of 55 items from the 1,800 objects in MoMA’s Design Collection. This was published in September 1970, and the Press Release quotes Drexler: “If they were dug out of the desert a thousand years from now, the objects in the Museum’s Design Collection would tell archaeologists—even those from another planet—something about the people who made, used and treasured them.” Thus began Stan Ries Photography.

It was Drexler’s colleague, Associate Curator Mildred Constantine, who first introduced the Transit Authority to Unimark and Massimo Vignelli, which led to the contracts for redesigning the subway signage (1966-1970) and the subway map (1970-72). The MoMA Design Collection subsequently acquired Vignelli’s 1972 subway map as well as the 2012 revised edition (co-design by Massimo Vignelli, Yoshiki Waterhouse and Beatriz Cifuentes), and indeed sixty-six other items designed by Vignelli, including three subway signs. But they never acquired the 1979 subway map designed by the Tauranac Committee. This, I believe, underlines that Vignelli’s work was situated within the recognised design lineage of Modernism and accepted as valid design work, whereas the work of the Tauranac Committee was not: it was design brut by analogy with art brut.

After the collaboration with Arthur Drexler at MoMA, Ries photographed furniture designed and marketed by Knoll International, who engaged Vignelli for their corporate graphics from 1967 onwards. Through this he gained a close working relationship with the Vignellis.

Stan was then living (and still lives) in Great Jones Street, just three minutes walk from Cooper Union. So, when he heard about the subway map debate between Vignelli and Tauranac, he walked over with his camera. Although he was not commissioned by Vignelli on this occasion, his association with Vignelli led him to focus on Vignelli in his pictures. So, for example, there is no picture of Tauranac speaking.

Frame 1.44, taken before before the indoor shots, is a night-time outdoor photograph of Cooper Union.

The Cooper Union doors opened at 6:30 pm, for an event starting at 7:30. An exhibition of maps was set up in the lobby (the set of maps comprising those of both the Cityana and AIGA shows), and the attendees milled around the exhibits before going into the Great Hall. On April 20, 1978, the sun set at 6:40 pm, so Ries must have arrived a bit later when it was already dark, and there was already a crowd. He shot twenty-one frames of the crowd, mostly featuring Vignelli. Some of the maps are visible in these photographs but we do not have anything like a complete visual record of what was exhibited. Around 7:30 pm, Ries entered the Great Hall, and took frames 1.23 and 1.24 of the lecture space, revealing chairman Peter Blake on stage with Vignelli and Tauranac, and the audience filtering in.

The first part of the evening comprised illustrated talks by Vignelli and Tauranac. After this, the lights came back up, and a table was set up with the two principal speakers and seven additional speakers forming the panel of nine. Ries shot a further 27 frames of the panel in the Q&A discussion.

Ries never published these historically significant photographs. It seems that the contact prints went to Vignelli, and the negatives were filed away in Ries’ personal archive. No photographs of the Cooper Union event appeared in any of the three contemporary press reports: Bryan Brown in WestSider, May 4th; Michael Leapman in The Times of London, May 8th; Ann Goldstein in New Yorker, July 24. (Brown did included a MTA shot of the Donnell library exhibition, but that was held after the Cooper Union debate.)

I first heard of the Great Map Debate from John Tauranac, many years ago, and he furnished me with two newspaper cuttings – the ones by Michael Leapman and Ann Goldstein. That was it. That was all the information I had for several years on this intriguing event. A few years later, in the Summer of 2011, I took the Greyhound bus up to Rochester for a two-day visit at the archives of the Vignelli Center for Design Studies. Massimo Vignelli warned me that I was wasting my time because, he said, there was nothing to do with subway maps there. But … scepticism runs through the veins of every historian. I had to check.

I was greeted by Joyce Hertzson, the acting archivist. The Center had been open only nine months and did not yet have a permanent archivist. Joyce had already found some astonishing prototype maps of the Washington Metro, that Massimo had forgottten about (see pages 22 to 25 of my Vignelli book). They were unsigned and undated, but I recognised Massimo’s spidery handwriting on the back of one of them. Golden Rule #1 for archive hogs: Always look on the back.

I searched through boxes and folders of an uncatalogued wealth of material, looking for any materials that would help my understanding of the evolution of the subway map in the 1970s. I was excited to discover an original invitation to the Subway Map Debate. Suddenly, what had seemed like an abstract event from a generation ago became tangible. I held in my hands an actual invitation.

Several boxes later, however I came across something that took my breath away. In an undated envelope labelled “Subway Map Debate” were three sheets of contact prints. Screwing my eyes up, I realised I was looking at the debate itself. I recognised Massimo Vignelli, and John Tauranac, and Hugh Dunne, and—surely that was Arline Bronzaft waving her papers in the air? I did not see any name or other information. I scanned them in and carried on.

While there, I had a chance meeting Molly Q. Cort of RIT Press, out of which came my first book, Vignelli: Transit Maps in December of the following year. Of course, I wanted to print all the pictures from the contact sheet. After all, this was a pivotal event and these were the only visual records. But Molly pointed out that the book was already over-budget and over-stuffed with pictures, and no, I could not pack more pages of grainy scans of low-resolution contact prints into it. (Nor the invitation!) This editorial discipline allowed me just one picture, on page 78, showing (left to right) Massimo standing with Rudolph de Harak and Karl Fink (frame 1.5).

After my Vignelli book came out in December 2012, I kept trying to track down the photographer of these contact sheets, with no success until 2021. The new permanent archivist, Jennifer Whitlock, had been responding to a query from a design enthusiast from San Diego, and she had ascertained that the photographs were taken by Stan Ries. Amazed by her sleuthing, I asked Jennifer how she had found this out. “I looked on the back”, she replied. I could not believe it! Surely I would have scanned the back when I found them in 2011? But Jennifer sent me scans of the stamps on the back of the three contact sheets. I had broken the Golden Rule #1 for archive hogs: I hadn’t looked on the back.

I quickly got in touch with Stan, who very generously agreed to let me use his pictures in my forthcoming book; and by this time he had donated his negatives to the Vignelli Center for Design Studies. Kudos to Stan for having the presence of mind to take the pictures back in 1978, for keeping them safe for 43 years, and for having the generosity of spirit to lodge them in the archives in Rochester for researchers to study.

Taking a closer look at the pictures, and the frame numbers, I noticed something odd. Frames 1 to 22 were shot in the lobby; Frames 23 and 24 (see above) were shot in the Great Hall before the talks began; but the shots of the Q&A session begin at frame 42. And there were no shots at all of the actual presentations by Vignelli and Tauranac that took place between the entry into the Hall and beginning of Q&A. Were there 41 shots missing? Excitedly, I emailed Stan and Jennifer about where the missing negatives might be. They both set me straight. There was no such thing as a 44-exposure roll. Stan had, in fact, used ‘bulk film’, something that only professional photographers knew about. The bulk film is cut by the photographer into strips of convenient length, which do not necessarily run from 01 to 24, or 01 to 36, as retail rolls do. In fact, Stan’s first strip of bulk film ran through 39,40,43,44,1,2,3,…24 (30 exposures) and the second one through 42,43,44,1,2,3,…26 (29 exposures). There were no missing frames! But, why were there no photographs of the actual talks by Vignelli and Tauranac? Stan’s simple explanation was that the Hall lights were switched off, and the film he used for taking pictures in the lit room would not have a high enough ISO to capture the two speakers in the dim light of the slide projector.

Of course, all this is different in modern digital photography, where there are no rolls of film, and the ISO level is just an electronic setting.

One of my favourite frames is 2.22, the only one showing the nine panellists

From left to right:

The positions of the columns made it hard to see the whole panel from all angles. Richard Harrison gets cropped off in most shots as he sat at the opposite end from Vignelli and Tauranac. Frame 2.18 is really the only good view of Harrison.

After the debate, Vignelli wrote to the chairman, Peter Blake, complaining “I felt homicidal urges towards Mr. [Hugh] Dunne and his arrogance. The MTA has displayed such a lack of methodology and responsibility that it leaves one hopeless.” It is only when listening to the tape of debate, that it becomes apparent that Dunne was baiting Vignelli, using half-truths and calling Vignelli “naive” for taking the MTA at their word. Stan Ries has caught the moment when Dunne was at his most supercilious:

During the Q&A, the audience played by the rules, except when Dr Arline Bronzaft got up to tell everyone the importance of testing the maps scientifically instead of relying on the dictates of Vignelli and Tauranac. She had already delivered an impromptu mini-speech in the lobby, and now she gave another mini-speech in the Q&A. Blake ordered the microphone to be taken from her. Here we see Bronzaft in mid-flow, waving her 1976 research paper air the air.

There are many more interesting pieces of information to derive from these photographs, and further analysis will be given, using the full resolution images rather than the contact prints we see here, in my forthcoming book, Geography Bites Back: Volume 6 of A History of the New York City Subway Map.

The Rosetta Stone of Subway Colours